In Her Own Words

I was the middle child out of five who could do anything my mind was set to do. My parents used to say, “Beth is our ‘can- do girl.’” I started early as an entrepreneur. In the ninth grade I sold candy to my classmates. By the time I got to high school I was turning over $200 of candy a day—and I never ate my profit. I had two book bags: one for books and the other for fifty pounds of candy. I eventually earned enough to buy a new Nissan Sentra and pay for my own insurance too. You can read more about my school days as an entrepreneur in Backyard Secret Exposed.

Shortly after high school I became the youngest bail bondsperson in the state to start her own company. A local TV station followed me around for eight hours and did a news feature on me taking a bond skip to jail. But after three years I needed more to do so I opened the first of two Subway restaurants I owned and operated. A couple years later I remodeled a building and opened a salon with ten styling booths, three nail booths, a tanning room, and a massage room. With the bail bonding company, the Subway restaurants, and by then, a coffee shop, and two small children plus a husband at home, you could say I was the definition of high-energy. I was a multi-tasking perfectionist too. I painted my baseboards twice a year, vacuumed my furniture weekly, and kept all drawers neat and tidy. My husband once said he married a plumber, painter, and landscaper who could fix anything as well as prepare meals quickly without making a mess. When we moved into a beautiful new house—that changed our lives forever. I was very busy and endorphin-happy keeping my yard perfect and my house nice. From painting, plumbing, building a playhouse on stilts, changing carpet, you name it. They called me “Project Girl”—I always had a project going.

But my attention and desire changed. I went from being all that I could be to not caring so much. I felt like I was going crazy in my body. I became very sensitive. Angry and annoyed. Then I couldn’t remember things, like numbers, which was particularly unusual because that had always been my specialty. My daughter would say, “Mom what’s going on with you?” Things got progressively worse until I couldn’t even go to my store; it just made me feel anxiety. I was starting to experience all these pregnancy symptoms and I would swell more while I was in the store—even my employees were getting a little concerned with how I was acting. Then the big day came when I literally felt my brain shutting down.

Looking back on my experience I’m amazed that I survived this nightmare—because there was no help available for me from anywhere. No one understood what was going on with me. I’d go to doctors and they couldn’t tell me anything. I almost gave up.

Don’t ever give up. If you’re going through something you don’t understand, you can survive it. I pray that my story will not only help you become aware of the invisible entity which almost took my life but that you, too, will come to realize that you can overcome forces greater than you. 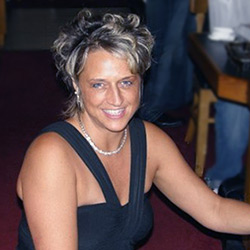