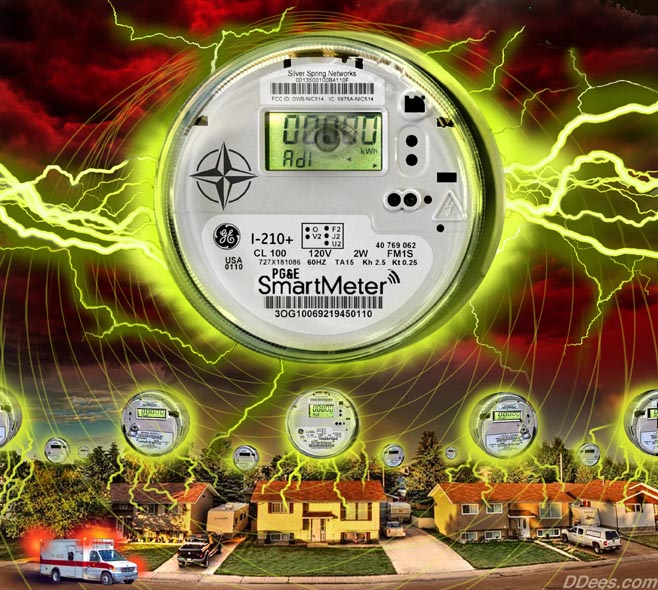 The new Smart Meters which are being installed and used to roll out the Smart Grid Electrical System, are causing major health issues around the country. In this Post I will touch on the major health concerns and how you maybe able to counteract the effects and protect your loved ones.

We have a thousands of pieces of evidence and independent research to be able to conclude unequivocally, that Smart Electric meters do cause major health issues which are being ignored by the electrical companies and our government agencies which are tasked with protecting us from this kind of harm. Adverse health effects from electromagnetic or wireless radiation, at much lower intensities then Smart Meters currently use is already known to cause cancers and Electro Magnetic Sickness.

Quick tip: (lowing the power output of the meter is not the answer to eliminate the risks.)

Thousands of scientific studies have been published in the last ten years which illustrate the proliferation of smart grid radiation and how it can be potentially catastrophic for all organic life on Earth. Yes, I said all organic life, and no, this is not a misprint or typo.

“With respect to symptomatic results with smart meters to date, thousands have already reported serious health problems since the installation of smart meters in their homes, apartments or places of business.

During the filming of Take Back Your Power, we worked with an independent environmental consultant who tested a room of smart meters in Vancouver, British Columbia. The result was a radiation level 198 times higher* than threshold for “extreme concern” set by the international Building Biology guidelines. As in our measurements, radiation has been confirmed and measured time and again as pulsing every several seconds, again blatantly contrary to statements made by governments and utilities.

Note: For a reference list of several thousand published scientific studies which indicate harm from the same type of microwave radiation as transmitted by smart meters, see: http://justproveit.net/content/studies

“…..When the chart is corrected to reflect the same units of measurement, it appears that smart meters are at least 100x more powerful than cell phones, which are increasingly being linked with brain tumors.” Dan Hirsch, UC Santa Cruz Nuclear Policy expert, 21 Apr 2011 http://stopsmartmeters.org/2011/04/20/daniel-hirsch-on-ccsts-fuzzy-math/

“It’s one thing to be on a cell phone for one hour per day, but if you are exposed to smart meter or a cell tower, you are exposed 24/7 so the effect is cumulative.” Henry Lai, PhD, Professor, Bioelectromagnetics Research Laboratory, Dept. of Bioengineering, University of Washington (Seattle) http://www.earthisland.org/journal/index.php/elist/eListRead/emf_concerns_causing_smart_grid_interference/

“We have evidence…that exposure to radiofrequency radiation…increases the risk of cancer, increases damage to the nervous system, causes electrosensitivity, has adverse reproductive effects and a variety of other effects on different organ systems. There is no justification for the statement that Smart Meters have no adverse health effects. ……An informed person should demand that they be allowed to keep their analog meter” Dr. David Carpenter, a Harvard Medical School-trained physician who headed up the New York State Dept. of Public Health for 18 years before becoming Dean of the School of Public Health at the University of Albany, where he currently directs the Institute for Health and the Environment http://nosmartmeters.blogspot.com/…/public-health-physician-warns-of-smart.html

“The duration of the radiation seems to be more important than its strength, with the effects being cumulative as more and more cells are damaged. …….Diem et al. (2005) also found that the effect on DNA damage was still greater if the microwaves were pulsed or modulated to carry information (modulation involves sudden stops and starts of the signal, which are even more damaging). Smart meters, which operate 24/7 and radiate modulated microwaves intermittently, can therefore be expected to be particularly harmful to DNA.” Dr. Andrew Goldsworthy, Lecturer in Biology (retired), Imperial College London “How Smart Meters May Cause Autism And Cancer”, July 2011 http://www.foodsmatter.com/es/dect_smart_meters/articles/smart_meters_autism_2011_goldsworthy.pdf

Solutions can be hard to implement.

You may use the following resource as a guide: https://takebackyourpower.net/solutions/ However, we also advise you to seek a qualified licensed attorney for anything that would require legal advice. We are not lawyers and can not give any form of legal advise because we are not trained in legal matters or licensed.

Address to Welsh Assembly (Parliament) by B. TROWER On Wireless Telecommunications.

Somebody please tell me why this information is not on every major news channel 24 hours a day?