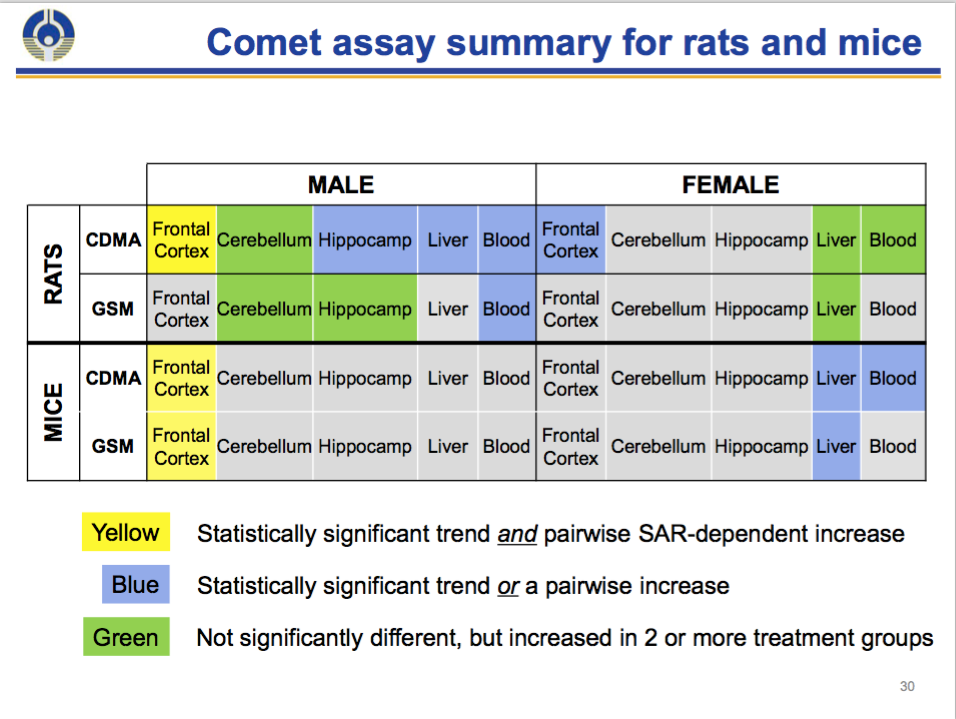 In May, the U.S. National Toxicology Program (NTP) announced that male rats exposed to cell phone radiation developed higher rates of cancer. Soon, the NTP will explain how that might have happened. The same RF/microwave radiation that led male rats to develop brain tumors also caused DNA breaks in their brains. Female rats —which did not have significant elevated tumor counts— had fewer DNA breaks.

The NTP results provide “strong evidence for the genotoxicity of cell phone radiation,” Ron Melnick told Microwave News. Melnick led the team that designed the NTP study; he is now retired. This “should put to rest the old argument that RF radiation cannot cause DNA damage,” he said.

DNA breaks were also seen in the brains of the RF-exposed mice, though the increases were less pronounced than among the rats. The NTP has not yet released the tumor results for its study in mice.

The NTP project design called for a sample of rats to be sacrificed after 19 weeks of post-natal radiation exposure —five from each of the GSM and CDMA exposure groups, as well as five of the controls.1 Tissue samples for DNA assays were collected from those animals.2 The remainder of the rats continued to be exposed for the rest of the two-year cancer study.

A paper on the DNA findings has been submitted for publication and is currently under peer review, according to the NTP press office.3 Michael Wyde, who runs the NTP RF project day-to-day, presented some preliminary results at the BioEM2016 meeting in Ghent, Belgium, in June and later that month at the NTP Board of Counselors meeting. (His slides4 are here; and a video of his talk at the board meeting is here.5)

We respect and value you as a subscriber and will keep your email address safe. We do not share our subscribers information with anyone.